Safari users are today reporting an odd issue causing Apple’s web browser app to crash on both Macs and iOS devices. Several Mac users are also not receiving autocomplete suggestions when entering text into Safari’s address bar, with many pages including sites like Google failing to load completely. For many iPhone and iPad users, simply tapping on the URL bar causes Safari to crash.

URL searches, autocomplete, Top Sites and other Safari features rely on queries being sent to and returned by Apple’s servers, suggesting this is where the problem lies. The issue also seems to depend on what data the browser most recently cached.

The current fix for iOS and Mac involves disabling Safari Suggestions, which stops the app from crashing to the home screen. On your iOS device, go into Settings, tap Safari, and toggle off the “Safari Suggestions” switch. On your Mac, the same setting is found in Safari -> Preferences -> Search. 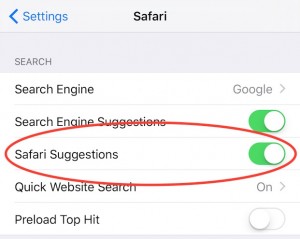